1976 (last building on the site demolished)

Rothwell Castle was a timber castle or fortified manor house, which was built by Ilbert de Lacy in the 11th century. [1] The manor, given its close proximity to Pontefract Castle, would have only been a satellite but would have been important as an administrative centre. [2] Some notable nobles stayed in or owned the castle, with both King John and King Edward II staying at the manor and John of Gaunt owning it. [3] Over several centuries, it fell to ruin and was rebuilt or modified, until eventually the last building on the site was demolished in 1976. [3]

It is likely that an Anglo-Saxon settlement existed on or near to the site of Rothwell Castle. In the Domesday Book of 1086, a wooden or stone hall is listed as having been in Rothwell (as well as Lofthouse, Carlton, Thorpe on the Hill and Middleton). The Anglo-Saxon Harold was Thane at Rothwell, but was essentially a tennant under the Norman Ilbert de Lacy. [2]

Following the Battle of Hastings, Ilbert de Lacy was given the Honour of Pontefract by King William I and he subsequently built an early castle on the site. [2] This early castle was likely a wooden structure (owing to the forest that would have covered Rothwell at this time and the affordability of wood compared to stone) built in the motte-and-bailey style. [2] The man-made motte was likely directly opposite Holy Trinity Church, but has since disappeared due to mining waste dumped there in the 18th and 19th centuries, with a ditch that ran between the Church and castle, which is now Wood Lane. [2] In later periods, a bridge would have crossed the ditch so that the Church and the Manor could be accessed easily. [2] 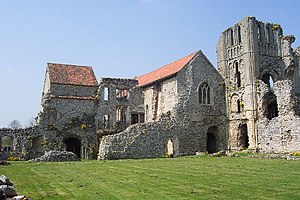 After Roger de Lacy died, his son John de Lacy was not of age, and became of ward of King John, which meant the Honour of Pontefract, including Rothwell Castle, fell under the possession of the King. [2]

In 1212, King John stayed at Rothwell Castle on June 12th and September 8th/9th. [2] King John called Rothwell Castle his 'Hospitium de Rowell', which suggests it was a manor house for relaxation and rest. [2]

When John de Lacy came of age, he bought back the Honour of Pontefract (excluding Pontefract and Darrington Castles, but including Rothwell) for 7000 marks from King John, despite 100 marks being a more appropriate amount. After John de Lacy's death, the Honour of Pontefract was passed down to his son, Edmund de Lacy. When Edmund de Lacy died in 1258, his son Henry de Lacy was not of age, which meant he grew up in the royal household with King Henry III, who became his guardian and guardian of his estates. Upon coming of age, Henry de Lacy inherited the Honour of Pontefract. His mother, Alice of Saluzzo, was given a widow's dowry, which included the manor of Rothwell, where she lived for around 40 years until her death. [2]

A 14th century manor house on the site likely included "a solar (a grand room for the lord), a Great Hall and ancillary buildings such as kitchens and storerooms". [2] It may have looked like the

Henry de Lacy died in 1310 without a son to inherit his estates and thus the Honour of Pontefract passed to his son-in-law, Thomas, Duke of Lancaster. Thomas was the uncle of King Edward II, who it is thought came several times to Rothwell between 1314 and 1319 when the north of England was being invaded by the Scottish. Thomas of Lancaster led a rebellion against King Edward II and was beheaded in 1322, which meant the Honour of Pontefract returned to the King. Local historian John Batty states that King Edward II came to Rothwell again in May 1323. [2]

King Edward III gave parts of the Honour of Pontefract to his wife Philippa, which were then passed to Henry, Duke of Lancaster. When Henry died in around 1360, the Honour of Pontefract passed to his son-in-law, John of Gaunt, who had spent the early months of his marriage to Henry's daughter, Blanche, in Rothwell. John of Gaunt was the uncle of King Richard II and, because of Richard was only ten years old when he came to the throne, John assumed control over affairs of state. Their relationship, however, became strained and John's son, Henry Bolingbroke was banished from the Kingdom. Upon John of Gaunt's death in 1399, Richard ordered soldiers to Rothwell Castle to remove its treasures and demolish parts of it, including the bridge to the Church. In the attack, the keeper of Rothwell, John de Rothwell, was killed after protesting about the destruction and the treatment of his daughter, Lady Rose. Henry Bolingbroke returned to England shortly after to claim his inheritance, and went on to imprison King Richard II in Pontefract Castle, and become King Henry IV in 1399. Thus, the Honour of Pontefract, including Rothwell Castle, returned to the King. [2]

After John de Rothwell died, the occupiers of the house are unknown but there is evidence that some buildings were used by tenants. The castle deteriorated and, at some point, the motte was abandoned while the bailey remained in use, however by the mid 15th century the stone built manor house was in need of repairs. In 1484, Roger Hopton was granted "pannage of pigs" in the park and, later, became tenant of the farm and manor. On the 27th August 1485, Hopton was was given a king's warrant to build another house on the site, which noted the manor was "in great ruyne and decay". The main manor house was constructed below the motte, incorporating the 14th century manor house or some of its buildings. It was built by in a half-timber style, which was popular at the time. [2]

In 2021, the Coach House, on Park Lane in Rothwell, was renovated, with the original timbers from Rothwell Castle being used as after "several consultations, it was agreed that the ideal new home for the historical timbers would be at the reconstructed Coach House" [4] However, some local people dispute that such consultations happened.[citation needed]